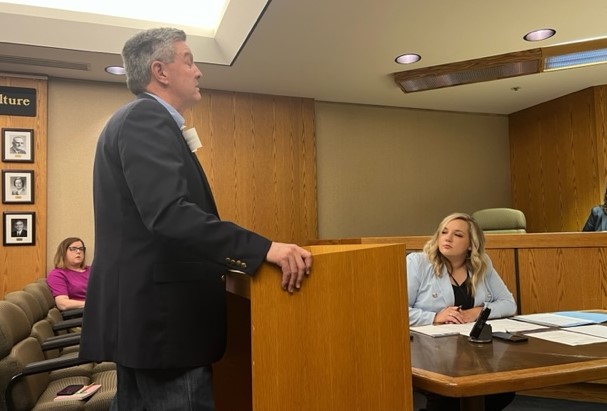 After Governor Kevin Stitt declared a drought emergency in the state of Oklahoma, the Emergency Drought Commission has now been activated and has three million dollars they can spend on drought relief.

“I’m very appreciative of the governor declaring the emergency, which then activated the commission, and then the legislature having the foresight to put three million dollars into the fund,” Kelsey said. “Is that enough? No, it’s not, but it is good, and it is helpful, and they are going to have a big job ahead of them looking over all these different ideas and all the different needs, but certainly, a process has started, we are thankful for that and we will continue to engage as we move forward.”

Kelsey was one of those addressing the commission and he said the biggest concern he has heard from OCA members has been the need for water.

“Hauling water is one of the most frustrating activities that you can do as a cattle producer, but it is absolutely essential,” Kelsey said.

Kelsey said cattle producers are having to face water-related issues such as dried-up ponds and wells slowing down.

“There are a lot of other ideas as far as forage management,” Kelsey said. “Obviously, we are having to buy hay and we are having to ship hay in. Spending these types of dollars from this fund for reimbursement of those types of activities might not be the best use, we have heard. There are some other funds available for that, so I’m not suggesting that it is a bad idea, I’m just saying that in conjunction with other funds, maybe those types of things could be addressed in other areas.”

An example of a way these funds could be used to aid producers, Kelsey said, is pond cleanout. Being that many producers’ ponds are already dried up, Kelsey said pond cleanout will not be as difficult of a task.

Cleaning out a pond, Kelsey said, is incredibly beneficial long term and can add up to 50 percent more storage capacity of water.

“That can be a long-term benefit and it may not take a lot of dollars per pond on a cost-share type system- obviously to clean out one pond is expensive,” Kelsey said.

Kelsey said on a cost-share basis, they may be able to clean out more than one pond per producer.

Another need Kelsey said that was discussed in the meeting was drilling water wells. This issue, he said will be more work, but might be more of an immediate need than the pond cleanouts.

“Well drillers are backed up from a part perspective, from a labor perspective, and from a job perspective, so it is hard to find a well driller to get out immediately as well as just the planning process,” Kelsey said.

Click the LISTEN BAR below to listen to Michael Kelsey talking about ideas to give producers drought relief during the first Emergency Drought Commission Meeting.