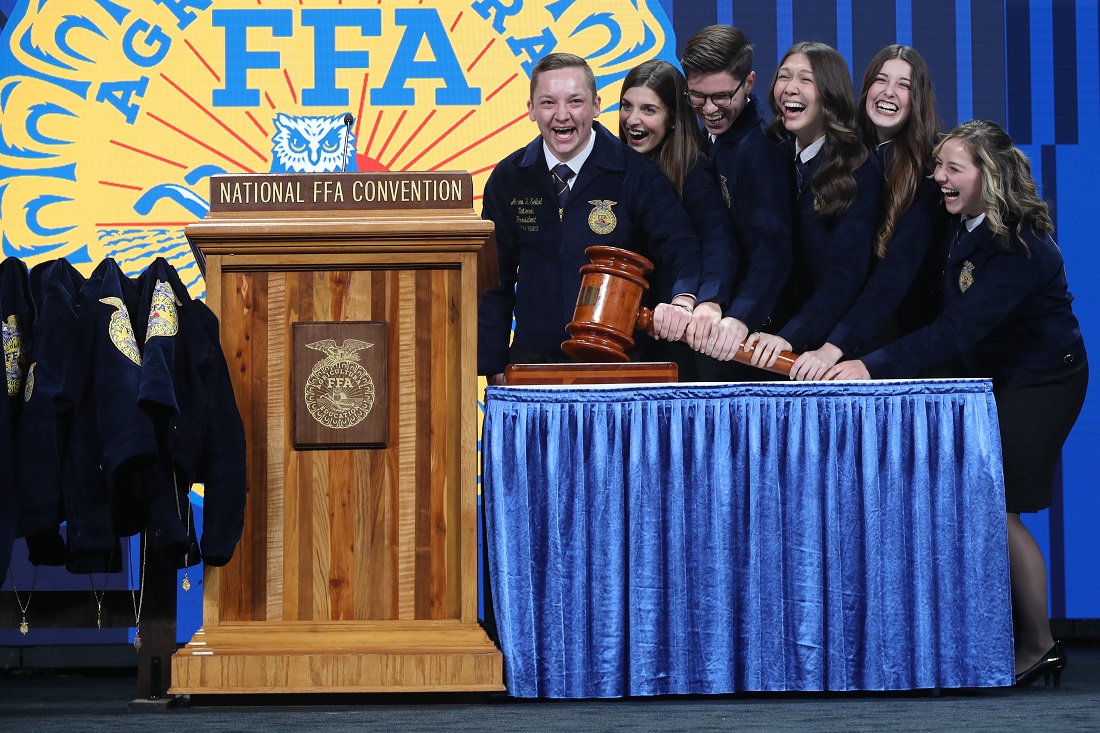 Karstyn Cantrell of the Skiatook FFA Chapter heard her name called on Saturday afternoon in the final moments of the 2022 National FFA Convention and Expo- and that meant that she will be one of six national officers for the National FFA organization over the next twelve months. Cantrell was selected this week to serve as the Central Region National Vice President of the 580,000 member organization.

Each year during the National FFA Convention and Expo, six students are elected by delegates to represent the organization as national officers. Delegates select a President, Secretary and Vice Presidents from the country’s Central, Eastern, Southern and Western Regions.

Throughout their year of service to the National FFA Organization, the officers will interact with business and industry leaders; corporate sponsors; government and educational officials; state FFA leaders; the general public and thousands of FFA members. The team will led personal growth and leadership training conferences for FFA members throughout the country and help set policies that will guide the future of FFA and the next generation of leaders.

After the final gavel of the convention- Senior farm and ranch broadcaster Ron Hays talked for a few moments with Karstyn- who said her heart was still beating fast from hearing her name called in the final conventions General Session. She added that she felt at peace throughout the week as she engaged with the nominating committee in a variety of settings. She had the advantage over other candidates in that she was a national officer candidate last year- and that experience allowed her to understand that she needed to prepare for a poential year of service instead of just preparing for the process of being interviewed and compared to the other candidates.

Cantrell says that she was able to show the Nominating Committee the "real me." As for who that is- "I told the nominating committee that I'm Karstyn and that when you look at me you see someone who production agriculture and the ag industry has shaped into someone who is outgoing and professional and polished but also poised. You know, I walk with that purpose and that humble attitude because of the way that ag industry and the FFA have shaped me."

She told Hays earlier that growing up on a fourth-generation cow-calf operation, that she feels lucky to have deep family roots within the agriculture industry. The transition to being involved in the FFA at a young age, she added, was seamless.

Early on in her FFA career, Cantrell said she learned the value of saying “yes” after listening to advice from a peer in her chapter.

“She told me to simply say yes,” Cantrell said. “Anytime there was a sign-up on the board asking if we wanted to participate in contests or camps or conventions, I always took that piece of advice and said ‘yes.’”

You can hear their complete conversation by clicking on the Listen Link below.

You can go back to just before the National Convention and hear their earlier conversation and read more by clicking here.

Click here for the National FFA release detailing information of all six national officers that will be serving together over the next year- taking a year off from college in the process.

The picture above shows Karstyn Cantrell second from the right as the new National Officers hold the gavel.