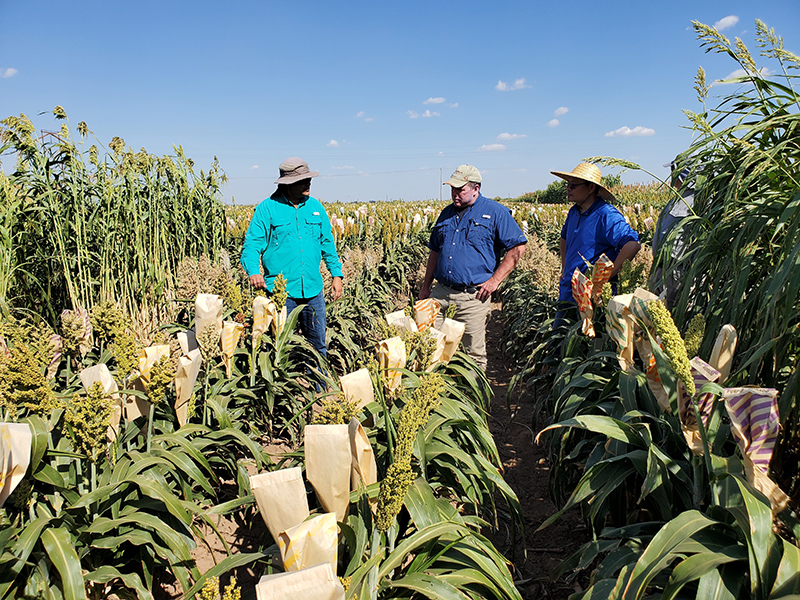 Sorghum has served as a food and feed crop for thousands of years, yet it can become poisonous under drought or freezing conditions. The problem is dhurrin, which breaks down to form prussic acid, also known as hydrogen cyanide.

But Purdue University’s Mitch Tuinstra, professor of plant breeding and genetics and scientific director of the Institute for Plant Sciences in the College of Agriculture, has developed a dhurrin-free sorghum technology that will set farmers’ minds at ease. The S&W Seed Co. of Longmont, Colorado, has licensed the technology, which will be widely available to growers in 2023.

“Cyanide poisoning is something that people who graze cattle on sorghum always have to be concerned about. It doesn’t happen all that often. But when it does happen, it’s a serious thing. This technology eliminates that risk,” said Brent Bean, director of agronomy at the United Sorghum Checkoff Program in Lubbock, Texas. USCP is a producer-funded organization dedicated to improving the sorghum industry through research, promotion and education.

“You lose even one, that is a big downside to the bottom line,” Bean said.

Making cyanide helps sorghum fend off chewing insects and grazing animals. But farmers still use sorghum as a forage crop because it works well in high temperatures, it tolerates drought and it produces a lot of feed with fairly minimal input.

“Sorghum is grown where it’s too hot and dry to grow other crops,” said Tuinstra, who also is Purdue’s Wickersham Chair of Excellence in Agriculture Research. “It’s grown where you don’t have other options. You can’t grow corn in these environments because it won’t survive.”

Farmers who grow sorghum in such environments have to manage it carefully to minimize the risk.

“Every farmer I talk to has stories about animals having problems, either small problems or major problems,” said Tuinstra. “This is a technology that can help alleviate that concern.”

Tuinstra began thinking about removing dhurrin from sorghum in late 2008.

“I thought that would be interesting because we know the genes, the enzymes, the biochemistry, but many questions about dhurrin metabolism remain unanswered,” he said. “So, the next summer, we started producing the genetic materials for this study.”

Sorghum is used worldwide, including in Africa, Australia, North and South America, and South Asia.

“Sorghum is an important crop in any place you have a hot, dry climate. And with climate change, that’s potentially very important,” said Jay Hulbert, president and CEO of Ag Alumni Seed in Romney, Indiana. “There are areas in the U.S. and globally where people grow other crops, especially corn, where they’d probably be better off growing sorghum.”

Scott Staggenborg, S&W’s sorghum product marketing manager for the Americas, expressed excitement for the technology because it solves a problem in a widely used product. Growers are also enthused.

“I have people saying, ‘I’ll buy every bag you have,” Staggenborg said. He noted that the technology can work in any type of sorghum, including sorghum-sudangrass, a summer annual with a robust yield that is hard to match.

“Lots of cattle are grown in semiarid and arid environments. Sorghum-sudangrass is important globally because of its drought tolerance and heat tolerance,” Staggenborg said.

Tuinstra partnered with Hulbert to develop prototype varieties, a patent and a business plan for the technology. They had considered launching a seed company in Indiana, but they learned that sorghum seed production works better in dry climates.

“Indiana is great for a lot of things, but not necessarily for making sorghum seed on a large scale,” Hulbert said. This led them to the S&W Seed Co., which is running trials this year in west Texas on Tuinstra’s most promising hybrids.

“This is a classic example of how university research is supposed to work,” Hulbert said. “Mitch had an idea and started working on something successful that none of the sorghum seed companies were working on. Then we find a way to take it to farmers through commercial channels to the private sector.”

Another key aspect of the technology was working with the Indiana Crop Improvement Association, an agency that certifies seed quality. The ICIA patented a new seed-quality assay using dhurrin-free sorghum as the prototype. The assay makes it possible to test large lots of seed with a high-tech, DNA sequencing-based approach to quality assurance.

“At Purdue University, we’re interested in developing transformative technologies that solve farmer challenges, and we’re trying to do that very broadly within Indiana, the U.S. and internationally,” Tuinstra said.

(Picture above A field in west Texas where S and W Seed Co. is testing a prussic acid-free sorghum developed by Purdue’s Mitch Tuinstra. Photo courtesy of Scott Staggenborg/S and W)