OCA Grateful to Legislature and Governor for Emergency Drought Help 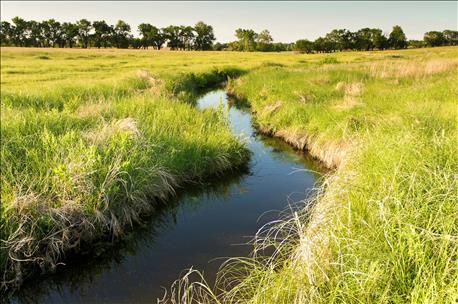 Senior Farm and Ranch Broadcaster, Ron Hays, is visiting with National Cattlemen’s Beef Association’s Executive Director for National Resources and Executive Director of the Public Lands Council, Kaitlynn Glover, as she gives her take on the Supreme Court’s oral arguments on WOTUS (Waters of the United States).

During the oral arguments for the Sackett v. EPA, Glover said several things stuck out to her.

“The interesting thing about this case is the Supreme Court has considered the concept of Waters of the United States a number of times in recent history,” Glover said. “Six of the nine justices who currently sit on this court are considering WOTUS for the first time.”

Glover said she believes the justices are interested in figuring out how to draw the line where federal jurisdiction ended and where it began, especially related to congressional intent.

“I think that concept of cooperative federalism, federal governments working with the states is incredibly important, but from a legal perspective, I heard a lot of questions centering around where to draw the line,” Glover said.

There were some questions about adjacent versus abutting wetlands, Glover said, and there was a lot of those sort of biological questions that lead to jurisdictional conclusions that the court was focusing on pretty heavily.

“I think all of the justices recognize the significance of the deliberations of the oral arguments yesterday, and so thinking about that durability, it was obviously top of mind for them as well,” Glover said.

This is an issue not only for cattle producers, Glover said, but for every part of the supply chain.

“I am having trouble thinking of another issue that is as pivotal to cattle producers and their ability to have business as usual but also to be good stewards as this question of where federal jurisdiction ends in the water space,” Glover said. “We have talked this year a lot about drought. Drought has been significant across the west and across the Midwest. There is no question that water is truly the lifeblood of western communities, but really of any community.”

When you start talking about the regulation of water and who is responsible and what the process is for managing some of those features, Glover said it becomes very personal, and immense quickly.

“I cannot underscore the importance enough,” Glover said. “This is why we at NCBA have been so engaged from the beginning. Not only in the definition of WOTUS but in a number of these cases as they have moved through the court system, through every single regulatory process.”

“Nothing is as constant as a regulatory process that might look okay on paper but just doesn’t work in implementation,” Glover said. “I don’t think that WOTUS has ever been in that category, but what is really clear is that the personal story, the question of implementation, and how a rule would be implemented is such an important part of the process in embedding our positions on a rule and how we engage.”

Click the LISTEN BAR below to listen to Ron Hays and Kaitlynn Glover talking about Supreme Court’s oral arguments on WOTUS.