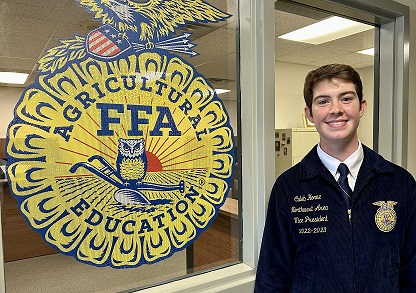 Caleb Horne from the Morrison FFA Chapter in Oklahoma was named the National Champion in the Prepared Public Speaking LDE Contest with his speech about carbon sequestration. Horne believes that it is imporant to educate farmers and consumers about this topic.

The top four individuals received cash awards to recognize their success in the event. The prepared public speaking LDE is designed to recognize outstanding FFA members for their ability to prepare and present a factual speech on a specific agricultural issue in a well thought-out and logical manner in a competitive setting. Members prepare and deliver an eight to ten minute speech from memory and respond to five minutes of questions. The event is just one way FFA members can develop their ability to communicate in a powerful, organized and professional manner.

Horne won the state of Oklahoma's Prepared Public Speaking Contest at the Oklahoma FFA Convention in Tulsa this past spring- earning him the right to represent Oklahoma at the National Convention in Indianapolis. He spoke on the efforts in the US to provide farmers financial incentives in the carbon sequestration arena. You can listen to Caleb Horne's presenation as one of the Final Four speakers at the National Level this past week. Click on the listen link below.