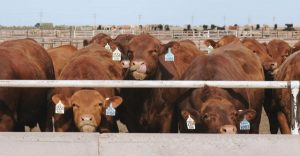 Ron Hays Beef Buzzes with Dr. Derrell Peel of OSU as they discuss the Nov Cattle on Feed Report

The November USDA Cattle on Feed Report appears to be a confirmation of what finally showed up in the October report thirty days earlier- cattle numbers in our nation’s feedlots have finally peaked and will likely be getting tighter for the foreseeable future- so says Extension Livestock Market Economist Dr. Derrell Peel.

“On the four percent fewer placements compared to a year ago, Peel says “I think we have finally reached the end of the rope there- there just aren’t more cattle out there.” Peel adds that the under 600 pound category are still up by two percent – saying there are still some of these lightest cattle coming into feedlots- but the heavier weights were under a year ago and made the overall cattle number down by one percent compared to last October first.

“Peel adds that this is all about the drought- “we have known that the overall feeder supply has been getting tighter- but that the fact that the feedlots have been able to sorta defy gravity this long has been a testament to what the drought has done and has been masking the real situation on cattle numbers- but you can only do that for so long and we have reached the lmits of that.”

Fast forward to the November report released this past Friday. USDA reported the November 1 On Feed 98.0% of last year, October Placements 93.9% and October Marketings 100.6%. The placement number was a record low placement for the month of October since the data series started 1996- and that is two months in a row of a changed placement pattern.

In today’s Part two of our conversation with Derrell Peel, he tells Hays higher prices are already starting to become reality as beef supplies get tighter- and that is just the beginning of the stronger cattle prices, which he says will really trend up when we finally get the drought past us and are able to restock our beef cow herds- “and we don’t know if that will happen in 2023- it depends on the drought conditions- but at some point in time- we are going to take smaller supplies of cattle and smaller beef production and squeeze it even farther because we are going to have to save a lot of heifers for herd rebuilding- we are going to cut cow culling to the bone and we will do the same thing in 2015 when we saw cattle slaughter drop to the lowest levels since 1963 and we will do something similar to that again at some poiint- probably not in 2023 but I think maybe in 2024 or 2025.”

Peel says that we may have liqudated even more of the female population than we did in 2011 and 2012 in this current drought cycle and that means a potentially more explosive upward price move that will come as we rebuild the cow herds in the months/years ahead.

Go back and listen to Part One of Dr. Peel’s comments on the November Cattle on Feed repport by clicking here. Listen to our part two by clicking on the Listen bar below as we do a deeper dive into what these numbers suggest for beef supplies, cattle numbers and price outlook for cattle producers in the short and longer runs.

Ron Hays Beef Buzzes with Dr. Derrell Peel of OSU as they discuss the Nov Cattle on Feed Report