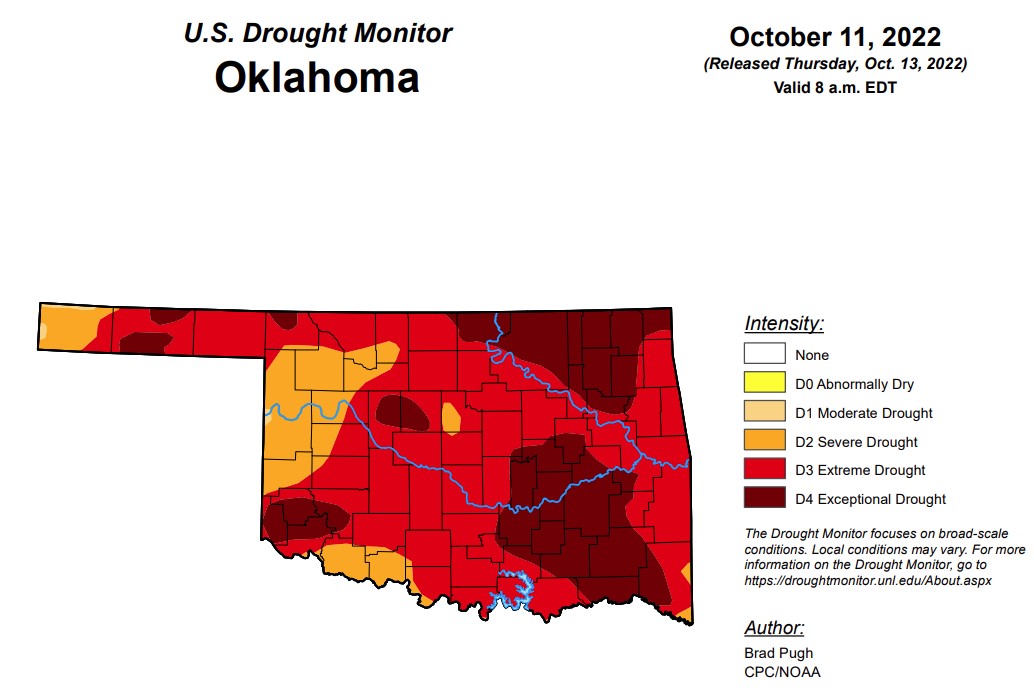 Oklahoma is now facing the most extreme/exceptional drought that is has seen since February of 2013 at 85.6 percent extreme drought or worse.

In Oklahoma, exceptional drought is at 29.1 percent, up significantly from last week’s 17.78 percent.

Extreme drought or worse is now at 85.6, up about ten percentage points from last week’s 75.7 percent.

Severe drought or worse is up to 99.6 percent, up slightly from last week's 99.5 percent.

Moderate drought or worse is up to 100 percent, up slightly from last week's 99.9 percent.

According to the latest U.S. drought monitor, following a drier-than-normal September for a majority of the contiguous U.S., this dry pattern continued into early October for many areas. Therefore, drought coverage increased and intensified throughout the Pacific Northwest, Great Plains, Ohio River Valley, and Southeast. From October 4-10, heavy rainfall (1 to 3 inches) was limited to the northern Mid-Atlantic, southern New England, and parts of the Southwest. New Mexico was especially wet this past week and this much above-normal precipitation extended eastward into west Texas. 7-day temperatures, ending on October 10, averaged above-normal across the West. Cooler-than-normal temperatures were observed from the Mississippi Valley to the East Coast with the first freeze of the season affecting parts of the Midwest.

In the Southern Plains, widespread, heavy precipitation (1 to 3 inches) during early October along with a wet 2022 Monsoon supported large-scale improvements across New Mexico. These improving drought conditions extended eastward to include western Texas. During the past week, rainfall amounts ranged from 2 to 4 inches, locally more, across the Davis Mountains, Trans Pecos, and southern Permian Basin of western Texas. Farther to the east across central and eastern Texas, another week of degradations were made. Based on 120-day, soil moisture, and impact reports, the coverage of D3 (extreme) to D4 (exceptional) drought was expanded across parts of Oklahoma. Rainfall was not enough to justify any improvements in southwestern Oklahoma with little to no response in soil moisture. Increasing 30-day deficits resulted in a 1-category degradation across parts of Arkansas, Louisiana, Mississippi, and Tennessee. The expanding D3 area in Arkansas was based on 30 to 60-day SPI and soil moisture indicators.

In the High Plains, 30 to 120-day SPI along with soil moisture indicators supported expansion of moderate drought (D1) throughout northern and eastern North Dakota. Based on a consensus of indicators, severe drought (D2) was added to central North Dakota. Severe (D2) to extreme (D3) drought was expanded slightly across east-central Nebraska based on SPI at multiple time scales and soil moisture. Likewise, these indicators supported a 1-category degradation in parts of south-central and southwestern South Dakota. Impact reports from these areas of South Dakota include: zero soil moisture down to three feet on several fields and low stock ponds. The most widespread degradations made to Kansas were in northeast and east-central parts of the state, consistent with 90 to 120-day SPEI along with soil moisture indicators. An expansion of abnormal dryness (D0) and moderate drought (D1) was made to southeastern Colorado, based on 30-day SPIs, declining soil moisture and streamflows, and very dry VegDRI. Conversely, heavy rainfall (1 to 2 inches) since the beginning of October prompted a 1-category improvement for parts of southwestern Colorado. Slight improvements were justified across northwestern Wyoming, due to positive values of 30 to 90-day SPI and favorable soil moisture response from recent precipitation.

In the West, increasing 90-day precipitation deficits of more than 6 inches and above-normal temperatures during September resulted in the continued expansion of moderate drought (D1) across western Washington and northwest Oregon. SPI values, soil moisture indicators, and 28-day streamflows strongly support D1 in these areas. According to the NCEI statewide rankings, Montana had its warmest July-August-September on record. Based on the 90-day SPEI along with 24-month SPI, extreme drought (D3) was expanded across northern Montana. D3 was eliminated in parts of eastern Montana due to the lack of support from SPI and SPEI values at various time scales. Based on longer-term SPIs and local feedback, 1-category improvements were made to parts of Utah along with bordering northeast Nevada.

Looking ahead, from October 13 to 17, a series of cold fronts are forecast to progress southeastward across the central and eastern U.S. The heaviest precipitation (more than one inch), through Oct 17, is forecast across the Northeast and also extending from the lower Mississippi Valley west to New Mexico. Mostly dry weather is likely to persist across the north-central U.S. and Pacific Northwest. Above-normal temperatures are forecast to continue throughout the northwestern quarter of the U.S., while below-normal temperatures expand from the northern P

lains to the Corn Belt and Ohio Valley.

Spanish The Climate Prediction Center’s 6-10-day outlook (valid October 18-23, 2022) strongly favors below-normal temperatures across the eastern and south-central U.S. with persistence of above-normal temperatures over the West. A majority of the contiguous U.S. is likely to experience drier-than-normal conditions with the largest probabilities (50 percent) for below-normal precipitation forecast across the north-central Great Plains. Elevated probabilities for above-normal precipitation are limited to the Southwest. 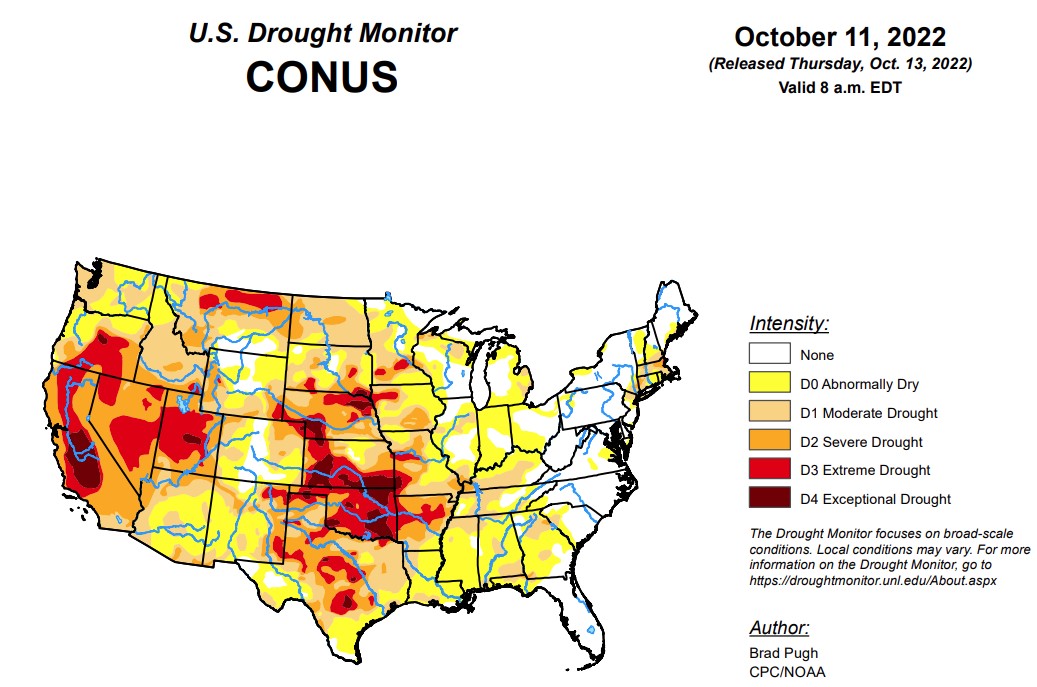